Sale on canvas prints! Use code ABCXYZ at checkout for a special discount!

OK, so after a battle of three days just to get started (long story) I was able to get into the azure underpainting yesterday and today.
I've still got a little more to do on this tomorrow. I'd like a bit more of the foreground tree's root showing here and there as it crosses the path under the snow. Just one or two maybe. Also I'll add a bit more snow at the base of the tree; I've got a shape in mind. Maybe smooth it out some too.
Sure things have changed around a bit, that's the exciting part of inventing as you go along...you get to see it emerge.
I haven't added any other color to this yet except varying values of Azure (Purple-Blue). It's kinda cool how the wolf appears to be Brownish already.

I'm feeling good about the general composition now. Thank you all so very, very much for your input. I appreciate it as it helps me to gain fresh perspectives and insights to areas of a piece that I may be over-looking etc. It DID look like that branch was growing out of her back LOL! Anyhow, a nice sloping hillside is what became of it all :)
Now...on to an Azure under-painting. That should keep the painting's core temperature in the chilly range!

...for The Love Of A Simple Background

Just about done with the drawing but most definitely not happy with the way the current background is.
I've actually revamped it a bit and will attack it later this evening. I'm feeling a distant hill, working its way toward the wolf. The tree on the right will disappear and become a stump and the branch on the upper left will also meld into a jumble of whatnot. Almost there!
Thankfully, I haven't used too much fixative, so going over the dark areas with white shouldn't pose extreme difficulties. If they do however, I'll go over those areas with acrylics and then re-draw.
Anyhow, for now....TaDa! After two evenings of nibbling away at the 22"W x 36"H panel.I'm making some head-way!
Still finishing up the legs and rest of the body leading behind the tree. Once those are finished, that will leave me with a solid foundation to work on the following session. The Wolf will be looking around a snow-laden tree trunk. I'm still unsure of the upper right corner. I was thinking snow-laden Pine bough? Possibly but I'll wait to dive into that idea pool until I'm a bit further along.
I'll be adding some more dimension to the bark in certain areas with the addition of gesso in those locations. This will literally bring the work into the third dimension ;) Should be fun actually....creating bark with gesso. Re-drawing areas which have been raised in relief and then mixing an array of varying Azure values.to facilitate an under-painting. "Azuraccio"
Finally, key areas will be warmed up with the addition of glazes and highlighting over-paints. I'll update the photos as they emerge. Alright now, I'm happy with where I've taken this so far and will get started on the tree bark this evening.
No, the wolf isn't totally where I'd like him yet but close enough to where I can begin other elements of the composition. On the inside looking out 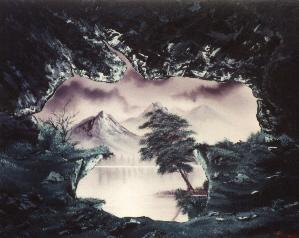 Now as I lay awake, nursing a nasty flu-like bug, I let my imagination soar. Unless this flu is making me delirious....which very well may be happening at this point. I do not know what mysterious force, is keeping me from beginning to create anew.
I've been fighting it and have drawing materials all laid out and ready to go and then Blammo! Knocked out the race temporarily.
I shall further my thoughts of an earlier piece, similar intentions, though now, it will elevate to a different level/depth.
What this particular work will actually be guiding me to do, is emerge FROM the depths of my self-constructed cave and fearlessly usher my creative being into a future of complete uncertainty. That's just Artist-speak for "It's time I got off my a$$ already and began drawing again! 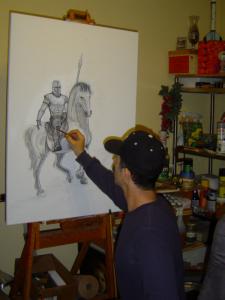 Studio painted a lovely Lavender hue...Check!.
All non-essentials out of the room...Check!
Motivation level building to a fever pitch with imagination in overflow mode.

I honestly haven't touched paint to canvas in almost a year now and am very upset about that. Depressed a bit actually BUT am ready to pull myself out of this slump now. Now that the Summer home renovations are complete, My wife can get back to her quilting and I can resume exercising my imagination via charcoal and oil paint. I'll begin with baby steps and allow freedom to the ideas that have been pre-occupying me for a while now. I love having an artistic "mission". A piece of work you are compelled to create. What compels us to create??? Forces from elsewhere I'd assume. Maybe a message from beyond trying to share itself with this dimension? Who is to be sure but whatever the driving force behind picking up a burnt piece of wood and sketching our thoughts with it, is quite impressive. For one to record their thoughts and ideas accurately is a gift. To draw what one sees in the mind's eye, is not such an easy task and to do so without any reference to speak of is not the usual norm. Reference material is preferred when creating a work of art. The better the reference, I feel, the higher the potential for a great work of art , though when all'
s said and done, It's up to the Artist to compose and make the artwork great.
Here's to unbridled freedom of mind and the power to embrace and convey our thoughts and dreams with the world not only this year but every year to come ~ May we all enjoy a Blessing-filled 2016!